The natural stone know as granite is formed in the earth’s mantle through the process of cooling and solidification of magma or lava therefore it is known as a type of igneous rock. The word “granite” is derived from the Latin “granum” or grain, conveying a granular structure. Granite is composed of feldspar, quartz, mica and amphibole. As a stone, it is massive, dense, hard and tough therefore it’s used as a perennial construction material.

The physical and chemical alteration of existing rock is named metamorphism and it is the process through which marble is formed. The natural transformation is developed through a combination of heat, pressure and permutation of minerals. The pressure, friction and collision of tectonic plates are good examples. The word provenience is from the Greek term “marmaron” which translates into “shinning stone”. While not as hard as granite, the marble’s beauty, elegance and refinement has defied the ages through some of the most exquisite human edifices.

The accumulation and deposition, of sediments and minerals such as mud, sand, pebbles, shells and other remains of living plants and animals, on Earth’s surface are called sedimentary rocks. Travertine is a type of this rock as it is formed by deposits of mineral springs, especially hot springs. Its coloring is very subtle therefore its use as a construction material is widely appreciated. Travertine has been used from ancient times and it adorns some magnificent buildings such as St. Peter’s Basilica in Rome. 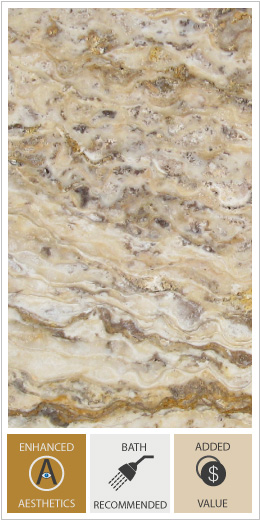 WHAT IS ENGINEERED STONE?

A composite material made from crushed stone bound together by polymer resin is the definition of engineered stone. The composition of a typical material is 93% quartz aggregates and 7% resin, although other materials such a colored glass, shells, metals, mirrors, etc. might be added for design purposes. Its coloring can achieve many modern looks and its usability is very flexible.